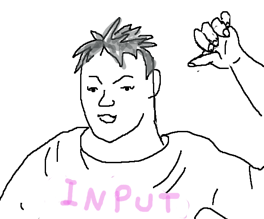 One needs fuel to run a car. One need food when he is hungry. For the increased output one need more input. When one wishes to acquire English, what do you think we need to do?

Yes, input! Reading and listening are input. We do not speak Japanese because we heard a lot of Japanese from people around us, not because we studied Japanese. My baby nephew is always paying attention to the people around him and watching and listening. His mother, father, grandparents and I are talking to him, reading books to him and showing him how to do things. You are not a baby, so do you think it is too late to acquire English like you acquired you mother tongue when you were a baby? Not so! Rather, because you are already a college student you have an advantage over a baby. Babies don’t know anything, but you know so much already about the world.

I believe that what you need to become better in English is comprehensible input. It is necessary and I believe that is something everyone wants.

It was the summer semester in my second year when I first took Dr. Mason’s class. When I entered university my TOEIC score was 290 out of 990. At the end of the 4th year before graduation the score was 795. I read graded readers in the university library. Then I read books for young adults, and recently I read the books by Haruki Murakami and by Malala Yousafzai. You may be surprised to hear that I did not read book even in Japanese before I began reading books in English. My favorite books are Harry Potter. I read all of them. I even read “The Power of Reading” by Dr. Stephen Krashen. I think the theory is right. I have experienced it. As I became an intermediate reader, I could express myself better and more.

While I was a student, I visited 10 different foreign countries – USA, Czech and other neighboring European countries, the Philippines, and Laos and the neighboring countries. I met many different people, and lived with them for a while. When I traveled, I experienced what I would not have experienced if I had stayed in Japan; Sometimes there were unexpected events which shocked me; Almost every day I heard words that shook my heart; Their actions moved me deeply; and I gained friends that I could trust. They all told me how important reading was, which I have never paid attention until I took Professor Mason’s course. Because I read a lot, I understood what they were saying to me, therefore I had a great time discussing about different topics with them.

During the time when the score was stagnant, I began to doubt the power of reading. Probably many students feel the same, too. But I am grateful for the support that I got from Professor Mason. If I began to study for the TOEIC preparation books, I don’t think I reached this point. I had a choice not to follow the teacher’s advice, but I kept reading. As I said I read all Harry Potter series. I could not imagine that I would be reading books like this when I was the first year student. I am convinced that the cause of English language acquisition is to read a lot of books that one understands.

There are 4,210,000 companies in Japan. One can get a job without English competence. But if you could use English there will be amazingly more choices in wider selection. Don’t you get excited when you just think about it?